What is Trump’s Endgame in Korea?

As I live and work in the Republic of Korea, I naturally have a certain immediate interest in the latest Trump vs. Kim saber-rattling — as in, “Am I on the brink of being hustled to an airport with a one-way ticket out of Dodge?” On the other hand, in a land permanently in a state of low-simmering war — no peace accord between North and South Korea ever having been signed — one tends to fall into an unhealthy default assumption that since nothing major has happened before, nothing major will happen this time.

In fact, to observe the demeanor of my Korean friends, colleagues, students, and neighbors is to be palliated to near-coma levels. Threats and agitations from the North Korean regime have been such a normal part of life in the ROK for so many decades that for a foreigner who has lived here and been immersed in the day to day life of Korean society long enough, it’s hard to imagine what, short of a missile strike on Seoul (or perhaps more than one), would push the average South Korean into a state of urgent concern.

The North vows to annihilate the South on a regular basis, carries out high-level weapons tests timed to get the most attention as deliberate provocations, and has, in recent years, shelled an inhabited South Korean island (killing several people and destroying property) and sunk an ROK Navy ship with a torpedo. These events are top news headlines in the ROK, of course, and cause the usual moment of outrage and frustration, just as they would if they were reports of events happening on the other side of the world. That these outrages are not on the other side of the world; that the threats are against their own people, the deaths from among their own fellow citizens; and that the military assault was directed against their own Navy, which carries a more personal implication in the ROK, where all healthy young men are conscripted for two years of military service — the men on that torpedoed ship could have been anyone’s sons or brothers — makes the typical Korean’s numbness to the threats and provocations almost surreal.

And I do not use the word “surreal” casually. There is an oneiric quality to the South’s approach to the North and everything it represents, suggestive of our reactions in dreams: the events feel real, but yet somehow do not quite stir the dreamer to a fully engaged response. This may have something to do with the specific nature of the threat. For the North Korean regime, from its inception, has fallen outside the bounds of reason to such an extent that it may be hard to see the danger it represents as falling within those bounds. It’s a little like having a crazy aunt living upstairs. She talks a lot and makes wild threats; occasionally we have a family meeting to discuss her condition and whether more radical action has to be taken. But somehow the sheer insanity of what she is doing and saying makes her seem less dangerous, as though she is operating, mentally, so far outside the realm of normal human efficacy that we can’t help feeling that all the wild promises she makes must be equally outside the realm of normal cause and effect. None of it seems completely substantial, but rather just a lot of explosions in her crazy mind. We therefore wish she would go away, but feel little motivation to exert all the energy needed to take the active, complicated steps that would actually get her out of the house.

Now the U.S. military is actively challenging the North regarding its nuclear ambitions. How serious the challenge is depends on which news source, or which “leaked” story, you choose to believe. Are we talking about a “preemptive strike,” as NBC implies, or not? But there is no question that the rhetoric has heated somewhat, and that the unspoken rhetoric of deployment has heated even more. The big questions are: Can this escalation end in anything fruitful, and what exactly is the Trump administration’s endgame in this situation?

There is no doubt that U.S. policy for a generation has emboldened the North — both Kim Jong-Il (he of the five holes-in-one during his first ever round of golf) and now his son Kim Jong-Un — to pursue an ever-whackier line of provocations and propaganda. Even a lunatic and world champion of Short Man Syndrome like Kim Jong-Il was sensitive to the benefits of serving wine and parades to a world champion of Unfeminine Woman Syndrome like Madeleine Albright. A less tolerant and legitimizing stand from the U.S., and a strong statement that the time for empty “negotiation” with the pot-bellied crackpots is over, are reasonable and long-overdue steps.

However, it would be unwise to ignore the irreversible damage done by a generation of treating the North with excessive forbearance and as trustworthy negotiators. The time for dealing bluntly and cavalierly with your crazy aunt is when she is still just talking a lot of inconsequential nonsense in the attic, not after she has stolen and loaded your shotgun and is aiming it at the door. The young Kim Jong-Un has real weapons, a lot of them, and has already shown himself to be unhinged and ruthless — or rather carelessly bold — in the manner of an extreme sufferer of his family’s congenital Short Man Syndrome. It is reasonable to assume that the only thing that prevents him from trying to rain a hundred missiles on the twenty million residents of metropolitan Seoul is that he still thinks he has more to gain from the threat than the deed.

What is his breaking point? What would push him into desperate action? Certainly any sense that his grip on power was being immediately threatened from without would be likely to trigger a catastrophically foolish response from a man seemingly capable only of foolishness of one sort or another.

The basis of playing chicken with anyone is the presumption one makes that one’s adversary is rational enough to flinch, which is to say that he has a natural propensity to step back from the brink of disaster. But if he doesn’t, or if he has made a literal or figurative suicide pact with himself, then what?

One might object that Kim Jong-Un is no Islamic suicide bomber; he wants to survive. That may be true, and it is certainly difficult to imagine the overfed, unstable Kim having even the twisted, maniacal courage of a jihadist. However, one cannot underestimate the influence of the North’s own propaganda on the psyche of its latest Dear Leader. His hold on power requires that he continue to be perceived as godlike, invincible, capable of superhuman feats, born to rule his people, and immovable. How much of that vision, force-fed to his starving population daily, has penetrated his own skull? A young heir to a small but monolithic kingdom who possesses the ability and the will to kill political rivals, including family members, with impunity is probably inclined to half-believe his own hype. All the talk of destroying the South Korean and American aggressors may well have sunk deep into his unrestrained and unchallenged mind, causing him to have more faith in himself, his arsenal, and the loyalty of his enormous military, than is warranted by the facts.

If so, then he must be approached with caution, as offensive as that prospect may be. No, the United States military, alone or in conjunction with the ROK’s, is not seriously threatened with defeat at the hands of North Korea. But that’s not the problem. The problem is that in the process of dealing roughly with this crazy aunt, now that she has been allowed access to the ammunition, she is very likely to spend a lot of bullets prior to being subdued. In this case, those bullets could strike one of the ripest targets on the planet, situated within easy range of even the most inept shooters.

Perhaps it never had to come to this, but this is where it has come. We are seeing the results of allowing progressives to control foreign policy in a dangerous world. South Korea had its own period of “Sunshine Policy” toward the North, as leftist sympathizers with the communist system tried to imagine the system could be judged separately from the regime. Likewise, American progressives have spent almost thirty years imagining the Kim family, though crazy, somehow presided over a system worthy of self-determination and autonomy. Now, like it or not, this folly has created an intractable problem. We cannot wish away the North’s arsenal and nuclear developments. They are here, real, and nightmarish, achieved right under the noses of successive progressive morons, East and West, left and right. The question is how to handle this new, far more difficult crazy aunt problem.

Throughout his campaign, Donald Trump appealed to his base in part by promising that he would not engage in globetrotting military projects where immediate American interests were not at stake. He even threatened to leave South Korea and Japan to fend for themselves against the North Korean nuclear threat. Who knows exactly what caused the recent about-face on those attitudes? But if this strong posturing against North Korea is the Trump administration’s attempt to further ingratiate itself with the so-called “globalist” wing of the Washington establishment, or to boost Trump’s poll numbers as patriotic displays of firepower tend to do, then the strategists had better take heed.

North Korea is not Syria. The Syrian regime has no serious capacity to inflict massive harm on an American ally. And Syria’s weapons, such as they are, are effectively aimed inward, against internal threats. North Korea’s weapons, much more deadly than Syria’s, are all aimed outward — and aimed specifically at America’s two most important, most politically sound, and most economically powerful allies in the region.

Whatever President Trump and his team have in mind here, let’s hope they are weighing all these factors carefully, and not succumbing to infatuation with their own hype. Kim Jong-Un’s regime might tumble like a house of cards at the first serious confrontation. But it is at least as likely, cultish power and megalomania being what they are, that Kim will choose to go out with a bang — a bang that could have historically significant impact on the Republic of Korea and Japan.

I truly hope Trump, or someone among his chief advisors, understands this. I hate traveling on short notice. 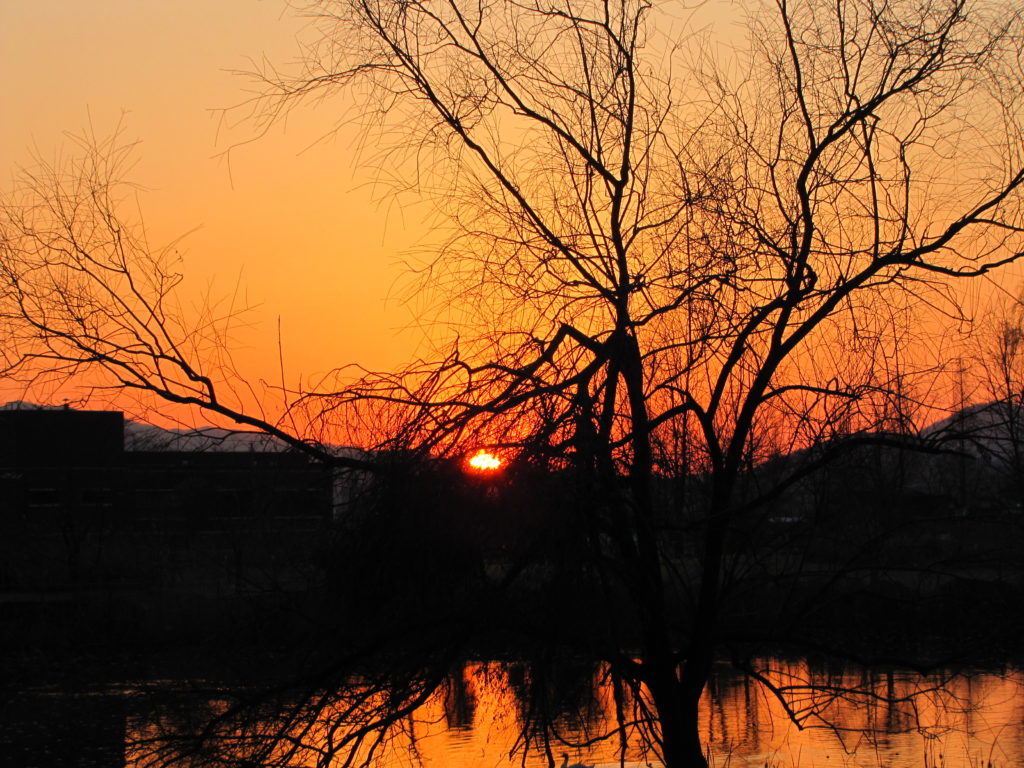