About Me: The Way of Opinion

(Here is a brief bio, written in the typical third person style, because it always sounds more impressive to pretend some anonymous biographer is introducing you, rather than just admit you wrote it yourself.*) 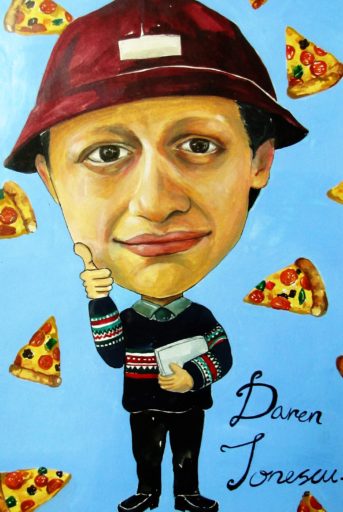 Daren Jonescu (rhymes with Ceauşescu) is currently Visiting Professor of English Language and Literature at Changwon National University in South Korea, where he also teaches in the Department of Philosophy and the Graduate School of Education. He has taught at every academic level, from kindergarten through graduate school.

He has a doctorate in philosophy from McMaster University in Canada, where his general area of study was the history of ideas, with particular focus on Greek metaphysics and psychology, as well as German thought from Kant to Nietzsche. Over the years, in one capacity or another, he has taught university students about almost every major ancient philosopher from Thales to Lucretius, along with many moderns including Hobbes, Locke, Rousseau, Mill, and Marx.

His commentary used to be featured regularly at American Thinker before that once-respected outlet succumbed to the unthinking and financially lucrative allure of the Trump cult, at which point he was forced — by editorial warnings and by his own conscience — to escape with his soul. The bulk of his online writing is divided roughly evenly between analysis of current political events and theoretical discussion of underlying themes related to the state of modern civilization, although these two foci naturally tend to overlap. His essays are studied in college classrooms, and he has appeared on several American radio programs, both local and nationally-syndicated, to discuss public education, electoral politics, the Korean peninsula, and political philosophy.

His book, The Case Against Public Education, is currently available as a free download or for online reading. It has been downloaded in PDF or e-book formats by readers in over sixty countries.

He wasn’t born in Kenya, but if there is any commercial gain to be had from saying he was, then he says he was. He has never been shot at by snipers in a war-torn region, but if his reputation might be enhanced by saying he has been, then he says he has been. In general, he claims to believe a number of things when believing those things might be to his advantage, but if he sees some personal benefit in claiming to believe the opposite of any or all of those things, then he claims to believe the opposite. He frequently promises to do things he has no intention of doing, just to gain people’s support, and if anyone questions his statements or criticizes his judgment, he calls them names or sues them.

*See the benefit of a third person bio? It almost looks as if someone else wrote it, so nothing “the bio writer” says can be pinned on you later if it turns out to be untrue. Anyway, if it’s truth you want, rather than packaging, you ought to jump over to About Me: The Way of Truth.