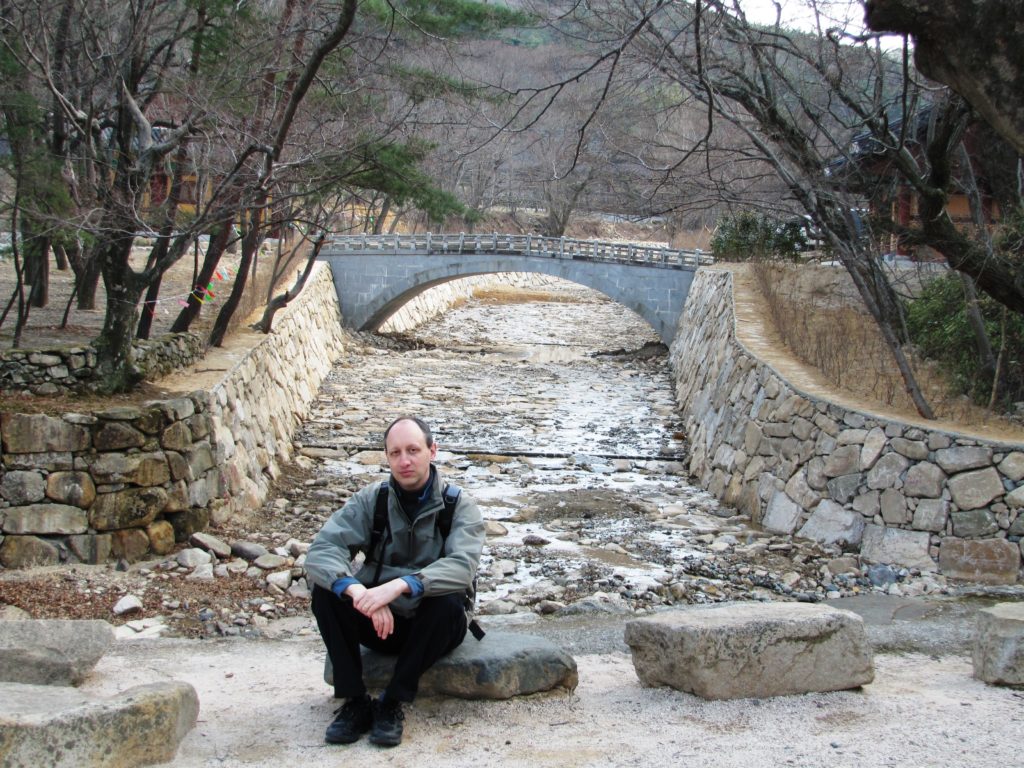 At Tongdosa Temple (Tongdosa = Pass through toward enlightenment)

I like to say that to my friends, as we all do, because it is another way of wishing them well, which is always pleasant. To be honest, however, New Year’s Day as such is probably the least interesting of all the major festive days for me, just slightly below Hallowe’en. Yes, it’s time to restart the yearly time counting system, at least for those of us following the solar calendar. So what? Perhaps my impassivity about “ringing in the new year” is related to my disinterest in the definitive signs of this “holiday” (what’s holy about it?), namely alcohol, noise, and crowds. I like reason, privacy, and the delights of thoughtful conversation, all of which are rendered inoperative by the standard New Year’s activities. I don’t like to see myself in an irrational condition, and I like even less seeing others I care about in such a condition.

As for the “countdown” itself, I find the ritualization of temporal concerns tiresome. Birthdays and anniversaries make sense to me, for in those cases the focus is squarely on the person or event being commemorated, not on the date itself. But New Year’s Eve and Day are purely temporal, rather than substantial, occasions, in the sense that what is being honored is no substance at all, but merely time per se, which strikes me as not particularly honorable. Do we celebrate “Length Day” or “Temperature Day”? Why does any system of measurement warrant a special celebration? Time and time measurement play an important practical role in our lives, but only as a condition or backdrop against which meaningful things happen. Time is a necessity of our experience, much as matter always underlies earthly life. But to celebrate matter as such would seem pagan to the point of primitivism. (Big plans for Earth Day, have you?) Likewise with celebrating the passage of time as such.

Apart from the elements of overblown, pointless revelry mentioned above — which are apt in the sense that false, exaggerated emotionalism is a typical sign of the lack of sincere feeling or purpose, much like excessive emoting on stage, or the heartless chest-thumping of our pop singers wailing longingly about some commercially-calculated ersatz passion of the moment — few indications of our ritualization of the calendar annoy me more than the obsession with “Best of the Year” lists: Best Song, Biggest News Story, Most Beautiful People, and so on. Perhaps it is an indication of a civilization that knows, deep in its heart, that it has run out of steam, that we feel a constant urge to tell ourselves that our time is rife with brilliant accomplishments, major news stories, and historically significant people, when in truth we know it is not. We know our accomplishments are miniscule, our news stories of transient significance, our newsmakers bland and vulgar, our entertainment dull and unoriginal, and our souls shrunken and flat.

So we break our time into manageable segments short enough to allow us to feel that we are always starting fresh, and conversely that we are always coming to the end of an important stage. Each calendar year becomes a mini-era, suited to the mini-life of a mini-civilization. We have become a dollhouse race. And New Year’s Eve, with all its attendant rites and portents, is one of our ways of pretending the child’s bedroom to which we have confined ourselves is really the universe, the temporal limits of our material existence really eternity.

Let us partake of the spirit of our age’s New Year’s obsession, then, but let us do so with an understanding of what that spirit really indicates: smallness.

I can think of no better way to participate in the true essence of New Year’s Day than by creating a “Best of 2016” list of my own, calibrated to the size of the occasion. And so let us “take a look back,” as they say, at some of 2016’s greatest moments of human smallness. Behold, if you dare, the “The Most Idiotic Public Statements of 2016.”

In honor of the most auspicious development of 2016, namely the development of America from a crippled republic into a suicide cult, no litany of idiocy would be complete without a contribution from the leader of the former free world’s great idiot cult himself, Mr. Trump. And we need look no further than the very last day of the year for a suitable example — when idiocy is your prey, you never have to hunt long with Donald Trump. Here, in case you missed it, is the Grand Twit’s New Year’s Tweet:

Happy New Year to all, including to my many enemies and those who have fought me and lost so badly they just don’t know what to do. Love!

Managing to be ungracious, unpresidential, and unmanly all in one master tweet, Trump lays bare his whole petty, pitiful self in those twenty-seven words. My first thought, upon reading them — that is, after I rebooted my brain, which tends to freeze into the dreaded “blue screen of death” every time I encounter Trump’s words — was of Christopher Guest’s loving satire of the dog show world, Best In Show. One of the memorable characters in that movie is a highly successful lesbian dog trainer (played by Jane Lynch), a true “Alpha male” who, on the eve of the movie’s climactic dog show, lets a combination of bitter pride and character-revealing weakness get the better of her as she spits out this interview rant:

That pretty much sums up the best we can say about the mentality of President-Elect Trump. Woe betide any ship of state with such a character at the helm.

From a New York Times article about the recent corruption scandal which has led to the impeachment of South Korean President Park Geun-hye:

[Park’s Saenuri] Party loyalists have banded together to thwart the impeachment effort. Lee Jung-hyun, the party’s chairman, warned against breaking ranks: “Even if you jump off because the ship is tilting, the only thing that awaits you is a sea of death.” He also compared party members wanting to impeach Ms. Park to Judas.

Though the Judas remark deserves honorable mention — implicitly comparing President Park to Jesus is awfully rich, when it is precisely she who is accused of selling her trust for thirty pieces of silver — the real highlight, given the Korean context, is this remark:

Even if you jump off because the ship is tilting, the only thing that awaits you is a sea of death.

In April 2104, the Korean ferry Sewol listed and capsized not far from shore, killing most of the passengers, including two hundred and fifty high school students who were ordered to stay in their cabins as the ship took on water and trapped them, rather than being guided to jump overboard and save themselves as soon as the danger of capsizing became apparent. That event — and particularly the failure to guide the students to safety, even while the captain and most of his crew abandoned ship to save themselves — remains a national catastrophe seared into the soul of every Korean. Party chairman Lee’s idiocy in scraping that tender wound with his rhetoric would be careless under any circumstances. But the specific content of his remark, warning people, in effect, to stay in their cabins in a sinking ship, rather than risk jumping into the sea, only proves Lee to be the most tone deaf Korean alive today, or perhaps of all time.

When a communist dictator and killer of thousands finally passes away, leaving those exiled from their homeland by his tyranny dancing in the streets for joy and justice, it takes a really special leader to stand up in the face of those exiled revelers, and amid the graves of the victims, and praise said communist dictator as a great man and the dearest of family friends. Fortunately, Canada is blessed with just such a leader in Justin Trudeau:

[Fidel Castro] was a legendary revolutionary and orator…. Mr. Castro made significant improvements to the education and healthcare of his island nation.

Lovely. Canada, returning to the tragedy of Pierre Trudeau, but this time as farce, is once again an official apologist for communism.

One of the most impressive achievements of Donald Trump’s presidential run — the most obvious to those of us still conscious, though the most impenetrable to his “alt-right” cultists — was Trump’s near-miraculous coup in making the Republican Party establishment great again. Suddenly, people who for years ostensibly believed the Washington insiders cabal was their and their country’s mortal enemy were embracing Mitch McConnell, John Boehner, Reince Priebus, and the rest of the duplicitous stealth-progressives club as their heroes — not by name, of course, but by the clever indirection of pretending Trump was something other than the puppet-in-waiting for those establishment hacks. So now they’ve got President McConnell in an orange sherbet hairdo, and rather than wising up to what their idol-worship has wrought, they are doubling down on the religiosity, living in a category of mental schism that makes denial look like hard-nosed realism.

And this brings us to 2016’s idiotic public statement Number 2, the apotheosis of a year’s worth of idiotic smearing of the so-called NeverTrump movement as a band of establishment traitors, rather than what they obviously were and are (taggers-along like George Will not being at all representative of the heart of the movement), namely American patriots refusing to hand the only viable political party they had over to an establishment-fostered cult of (authoritarian) personality. And who better to deliver the final summary of hatred for genuine constitutionalist patriots than that long-time establishment hack progressive-in-conservative’s clothing, Newt Gingrich?

The little whiny sniveling negative cowards who are NeverTrumpers are beneath our paying attention to them. Let them drift away into the dustbin of history while we go ahead and work with Donald Trump.

Right. According to Uncle Newtie, the cowards are the ones who attempt to resist an unstoppable juggernaut of mass hysteria, invective, and stupidity, and not the ones who sidle up to that mass stupidity looking for favors. Newt has always had a way with words. The wrong way, but a way nonetheless.

Most fitting as a demonstration of smallness, and most perfectly typifying the man who has stood as the figurehead of global smallness for the past eight years, we have Barack Obama, who at precisely the kind of moment when a statesman is called upon to speak, said…nothing.

His non-statement — his silence — in defense of Israel, as the UN passed a December resolution condemning that U.S. ally as an occupier of Palestinian land (including in Jerusalem) and an oppressor of the Palestinian people, spoke volumes about his true nature and that of his entire subversive administration. By simply choosing not to veto the UN resolution, Obama did what he has shown himself most adept at doing throughout his presidency, and indeed throughout his public life since his days as head of the Harvard Law Review: paying lipservice to centrism and moderation while quietly signing off on the strategems and policies of hardcore Marxist gradualism, i.e., progressive authoritarianism — with a fashionable dollop of sympathy for global Islamism on top.

One would like to say “Good riddance,” but I fear there will be no getting rid of Obama, or more importantly of the damage he has caused to his country, and to the world.

Okay, I admit it: Year-end “Best of” lists can be fun! Let’s do this again next year.