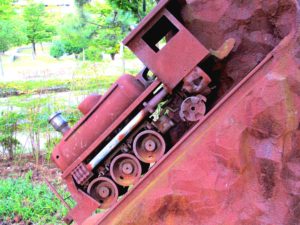 The Trump Train Forges Ahead

Donald Trump certainly wants to repeal Obamacare. He would have to hate it, if for no other reason than that, not realizing “Obamacare” is only a nickname, he would be ticked that the nation’s health care law has another president’s name attached to it. And that pretty much defines his “plan”: repeal the name, and rechristen the law “Trumpcare.”

His cult is enraptured over the genius of Trump’s administration ending the unconstitutional subsidies Obama used to prop up the so-called Affordable Care Act. And true to their cultish form, the man who led the cheerleading to steer Trump toward this move, Rand Paul, has been transformed from a traitorous, self-serving fake conservative — his identity a few weeks back, when he openly rejected the last Trump/McConnell “repeal and replace” bill — into a brilliant ally and charter member of Team Trump.

Worse yet, but most typically of these shortsighted Trump groupies, they conveniently praise the pretty packaging Trump flashes before their eyes without asking to see what’s in the box.

Great, killing Obama’s subsidies will kill Obamacare…and then what? Have any of these giddy fan club members stopped to think of something every American conservative with an ounce of foresight should be considering with the clearest possible mind, namely that the Democrats want Obamacare to die too.

Let me restate this for emphasis: Obamacare was never intended to be permanent law. Its purpose, stated quite openly by some strategists, including by Obama himself before his first term as president, was to be a door wedge for the idea of a federally-managed health care system, to be “repealed and replaced” at a later date by the Democrats’ real, longstanding goal, single payer health care, aka socialized medicine. The plan was always to inure the American public to the concept of government-controlled health care, so that the eventual progression toward full-on socialism would seem less like a radical transformation of the economy, and more like a natural evolution of federal programs and “entitlements” already entrenched in the national psyche.

So even if, as Rand Paul and others theorize, and as President Gonorrhea-Warrior blindly asserts, ending these subsidies will strike a death blow to Obamacare, everything will depend on what Trump and Congress come up with as a “replacement.” That there should be no replacement at all — that the federal government should not be rigging the health care market in the first place — is a moot point, since the entire Republican leadership is fully committed to the idea of replacing Obamacare with some new set of unconstitutional regulations, perhaps throwing in a few “market-based solutions” (as the talking point goes) to appease the ever-submissive GOP base.

We know Mitch McConnell never met a government power-grab he didn’t like, or a conservative principle he wouldn’t sell. He’ll be all in for the Obamacare Lite style of “replacement,” as his previous “repeal” efforts indicate.

We all know — well, that is all of us not seeing the cosmos through neon TRUMP logos these days — that Trump is personally in favor of single payer. He believes it works well in Canada and Scotland, and claims it could have worked well in America in some unspecified past, although apparently not anymore, for reasons he could never explain — mainly because those reasons don’t exist, but were merely a mealy-mouthed way of walking back his New York progressive tendencies during a GOP primary debate.

And we also know that Trump is, as he said he would be — Why doesn’t his cult trust his own words? — willing and eager to make “great deals” with Nancy Pelosi and Chuck Schumer, with whom he always said he had good relations, and whom he has supported financially in the past. We know they are among the faction of Democrats who always viewed Obamacare as a transitional step toward socialized medicine, so if they are involved in the replacement debate, their contribution will be easy to predict.

The death of Obamacare will only be good news if there is a political will to undo its damage to the principles of individual liberty and move American health care back in the direction of a free market, and indeed much more of a free market than has existed in the United States for generations. Is there any such will among the people with decision-making authority today? Obviously not.

Obamacare was not designed to succeed. It was designed to fail, after having fostered a stronger health care entitlement mentality among Americans, so that the majority of the population would reject any solution to its failure other than more or better “universal coverage.” Or at least so that that majority would sleepwalk through the process of being ushered into the dream of a “more efficient” government-controlled health care system.

As for Trump’s own aims in all of this, they are likely all superficial and politically meaningless. He wants to appease his base so they will continue to love him. He wants credit and adoration as the man who killed a bad program. He wants to boast of his greatness. He wants “Trumpcare” to be the law of the land.

So he killed the subsidies, as many previous Republicans have argued must be done. Great. But don’t get too excited. With Trump and his Uniparty establishment friends, there is always another side of the coin.