Trump: A Lying Moron You Can Believe In 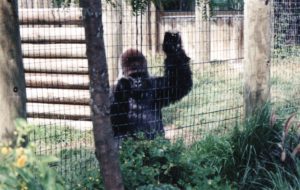 One day, Trump says DACA is a “bill of love,” he’ll sign anything Schumer and Feinstein put on his desk, and there will not be a real wall. His idolaters scream “treason.” On Thursday, Trump promises to “build a Great Wall” and complains about immigrants from the “s—hole countries” of Africa and the Caribbean. The cult is in heaven again.

In other words, Trump promises the moon to progressive Democrats one day, blows dog whistles for his bigoted alt-right base the next — and his fans are relieved on day two to be reassured that their hero has not really abandoned them after all, but is merely a lying, mentally-unhinged moron. “But he’s our lying, mentally-unhinged moron!” you can hear them replying. Yes, he is, and you’re welcome to him, but why should the rest of the world be forced to survive the damage he has done and will continue to do to every decent nerve in the American mind?

By the way, Trump’s full “statement” about immigration directly juxtaposed black immigrants to those desirable ones from Norway. Norway — one of the most thoroughly committed and fully indoctrinated socialist countries on the planet. To be fair, then, I’m sure Trump wasn’t merely alluding to their wonderful Aryan features, but to their socialized healthcare system, which he no doubt thinks is just fantastic, as he does the systems of Canada, England, and Scotland. So you see, he’s not just giving a little distracting red meat to his racist followers like Ann Coulter, he’s also reminding us he has the geopolitical instincts and knowledge of a typical government elementary school teacher.

“No,” his cult will object, “his Norway vs. Africa remarks had nothing to do with either race or socialism.” And they may be right — if we grant, as I am more than willing to do, that Trump is too dumb to know that Africans are black, Norwegians white, or that Norway is the democratic world’s kinder gentler Marxist dictatorship.

And speaking of geopolitical knowledge, who would promise to build “a Great Wall” — capital G, capital W — without realizing he just promised to build the most famous Chinese tourist attraction? Luckily, we know that isn’t a “deep state” call out to his new friend Xi Jinping, because (whew, what a relief!) Trump is too stupid to do anything that sophisticated, or probably even to know that the Great Wall exists.

Oh, by the way, Trump also just told an interviewer he might be on the verge of forming a great friendship with Kim Jong-un. Yes, that’s just what the world needs — the leader of the free world trying to make nice with a crackpot dictator who is starving his own people to death while threatening to blow up the free world.

When asked to explain how he can call Kim names and threaten him with annihilation one day, and then talk about forming a friendship the next, Trump, always happy to reveal his business secrets, gave himself away in the form of a boast:

“You’ll see that a lot with me,” Trump said, “and then all of the sudden somebody’s my best friend. I could give you 20 examples. You could give me 30. I’m a very flexible person.”

“I’m a very flexible person.” In other words, “I have no principles, no core, no goals, no interests other than whatever advances my personal advantage and enhances my reputation with any given audience on any given day.” That’s the same answer he gave during the primaries when asked about his long history of major donations to progressive Democrats. That’s the same answer he implicitly gives every other day on the wall; on his on again / off again love affair with the world’s bloody tyrants; on socialism in America; on you name it. In short, Trump is a complete zero as a human being: zero intellect, zero historical awareness, zero moral compass.

Having said all that, as bad as he is, his cult may be even worse. Certainly they are, collectively, more dangerous, since without them Trump would be just another boring old sociopath shouting at his television in his underwear.

Idiocy? Moron? Yes. If I hear one more time that he must be smart, or else he couldn’t be so rich and successful, I’ll know for sure I’ve died and gone to hell. Sorry, I tend to have a slightly different standard of intelligence. Call me old-fashioned, but for me a man cannot be judged smart until he can be shown to have done at least one of the following things:

Since I’ve yet to see evidence of any of the above from Trump, while I have seen plenty of evidence of his being a serial liar, an unscrupulous opportunist, an exploiter of human weakness for personal gain, an illiterate and inarticulate communicator, and a man completely ignorant of history, literature, world politics, or civilization’s formative ideas, I have no choice but to conclude — or rather to remain firm in my long-term assessment — that Donald Trump is a lying, mentally-unhinged moron.

I have no vested interest in believing that. On the contrary, it would be of great practical benefit to me to believe the opposite, not to mention of great emotional relief to know the world was in better hands than I think it is. But I’m not prepared to sell my mind to my convenience, my practical “success,” or my wish-fulfillment fantasies.