The Voice of Tyranny

Here is what progressive totalitarianism looks like. Read carefully, for the following statement has so much wrong with it that I am sure I will not come close to exhausting all of its outrages in this one short post: 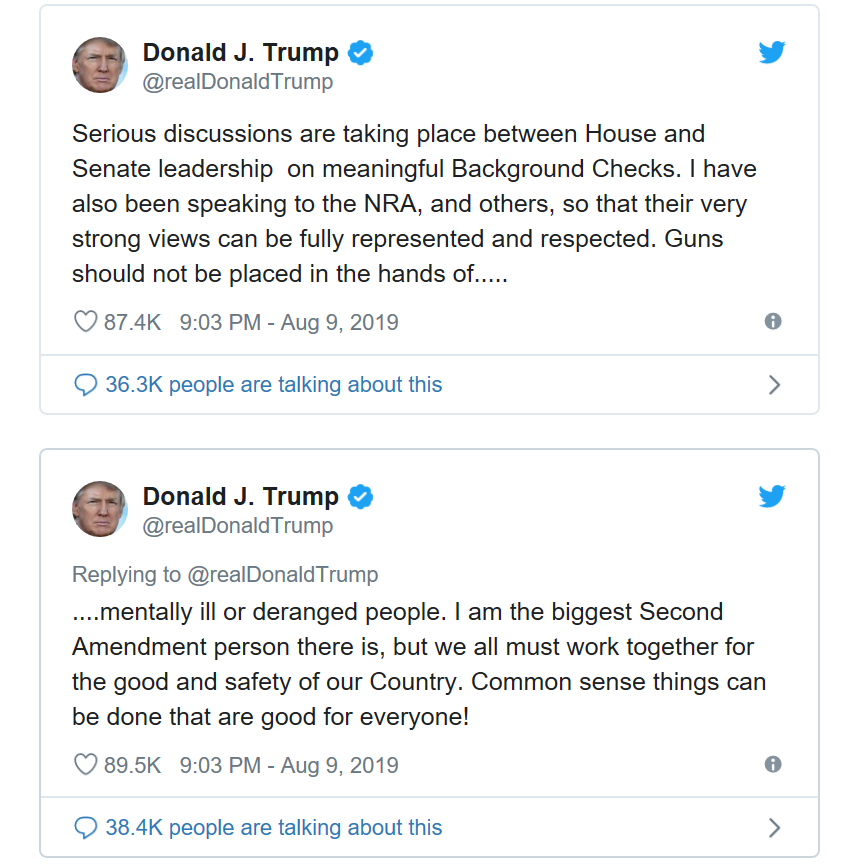 Since that statement, Trump has entered talks with gun control Democrats looking for “common ground” on so-called “background checks.” But the key sentence in the initial tweets, for me, is this one: “Guns should not be placed in the hands of mentally ill or deranged people.”

At a first hearing, this statement may ring true. After all, who wants a madman wielding a firearm? If you believed your brother or your neighbor was dangerously unstable, you would surely prefer that he did not have easy access to a gun. This very consideration was the undoing of old Cephalus’ definition of justice in Book I of the Republic. For he defined justice as paying what one owes, to which Socrates objected by asking whether this would apply to the case of returning the borrowed weapon of a man who had gone mad in the interim, and had thus become a danger to himself and others. A reasonable concern, in a conversation among private men about the meaning of justice.

However, in this context, spoken by the President of the United States, in support of the creation of new laws in which the government would — let’s not kid ourselves — grant itself the authority to remove guns from the rightful possession of citizens whom the state has judged to be “mentally ill or deranged,” Trump’s premise ought to send a chill down the spine of anyone who has given a moment’s thought to the meaning of liberty and the history of oppressive government. Perhaps to those who do care about liberty, and even more fundamentally about the rational arguments for the institution of political community as such, the basic problem is clear enough on its face.

But it is precisely in such areas, where those who value liberty can immediately see the problem, that deeper, more insidious assumptions may sometimes be lost in the haze of the superficially obvious. In this case, I would like to cut through the haze of modern rhetoric, political and psychological, to examine the hidden premise in Trump’s (or anyone else’s) argument for doing “common sense things” about gun control on grounds of “mental illness” or “derangement.” For the special danger in Trump’s principle that “Guns should not be placed in the hands of mentally ill or deranged people” is the presupposition that “mentally ill” and “deranged,” as these terms are used today, are legally applicable health concepts, as straightforward as “blind” or “pregnant.”

I am not speaking merely of the concern that these concepts may be distorted for partisan political exploitation, such as by criminalizing certain moral views by associating them with mental disorders, as is now commonly done with the various alleged phobias that dominate progressive political discourse — Islamophobia, homophobia, transphobia, and so on. This sort of exploitation of the language of mental illness is certainly a real danger, but it is only a byproduct of the more fundamental issue I am addressing, which is an error inherent in the general language of mental illness itself, by which I mean our modern treatment of the notion of mental illness as though it had scientific weight as a literal description of a physical disease.

Mental illness, as the term is commonly used, comprises a list of conditions of the soul which may or may not be manifested in association with certain bodily states, but most of which conditions are not identifiable with any physical fact susceptible to being repaired, or alternately judged irreparable, according to principles of medicine. The materialist biases and presuppositions of modern psychology, as with all social sciences, are theoretical presuppositions, interpretive models, and not facts of the sort one may observe under a microscope. And even as a materialist hypothesis, the concept of mental illness is intrinsically dependent on some theoretical construct of what constitutes “mental health.” For example, we know that blindness is a disability or deficiency, because we know what the organ of sight is supposed to do, and therefore we know that an eye which cannot perform this proper function is deficient. That is, we can clearly define the standard of health against which disease or disability may be measured. To say someone is blind is an empirical judgment, based on physical properties and propensities definitive of the human eye.

To say someone is mentally ill, by contrast, is a moral or metaphysical judgment, based not on any physical standard of health, but on a theoretical position regarding the proper workings of the human mind. To use judgments of mental illness as grounds for overriding specific rights the state is pledged to protect and defend is effectively to make the government the official and final arbiter in moral and metaphysical questions concerning the proper workings of the human soul.

And this language of mental illness is designed, in modern legal discourse, precisely in order to be exploited in this way. As Thomas Szasz has famously explained, the phrase “mental illness” suggests that there is such a thing as a literal disease of the mind, an inherently incoherent notion based on an implicit identification of the mind with the physical brain, as though the only causes of emotional or other mental abnormalities or anomalies were neurophysiological causes, i.e., as though the mind (as distinct from the brain) were in no way affected by the individual’s personal judgments or understanding of particular external events. This implicit assumption is intrinsic to modern materialist psychology, and it has allowed that academic discipline to develop as a tool or handmaiden of political ideology, vastly distant from, and essentially unrelated to, the classical study of the soul (“psychology” in the literal sense) which was once the heart of properly philosophical investigation.

In order for any version of Trump’s hopes on this issue to be realized, the following three premises must be accepted:

Once you have accepted all three of these premises, any notion that you are still operating on the principles of individual liberty and limited republican government is beyond absurd.

No one should be surprised that Donald Trump is taking this position. He is, and has been for the past three and a half years, both the most useful and the most idiotic of tyranny’s useful idiots.