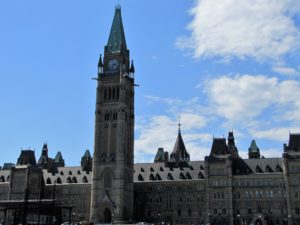 Do you think imposing so-called transgenderism on children as a sexual norm might be harmful to their moral development? Do you question the legitimacy of using made-up, so-called gender-neutral pronouns as replacements for the standard English words “he” and “she”?

If you answered yes, or even maybe, to either of those questions, then, as of today, you are in violation of Canada’s Human Rights Code, and subject to fines, re-education, or — should you refuse comply and repent — prison time.

Canada’s Senate has passed a “controversial” (read fascistic) new law, Bill C-16, which adds “gender identity” and “gender expression” to the nation’s hate crime laws — Canada being a world leader in legislating who should be hated and who shouldn’t — thus effectively making it a crime for a business owner to “discriminate” on the basis of not wanting his male employee to wear a dress, or for a teacher not to use a non-existent, politically correct pronoun whenever a student tells her to. More generally, it makes a hate criminal of anyone who openly expresses a view not perfectly compliant with the current zeitgeist on gender identity, transgenderism, or what have you. The debate is now, officially and legally, over.

“This tyrannical bill is nothing but social engineering to the nth degree, all in the name of political correctness,” Campaign Life’s Toronto vice president Jeff Gunnarson told LifeSiteNews.

“Mark my words, this law will not be used as some sort of ‘shield’ to defend vulnerable transsexuals, but rather as a weapon with which to bludgeon people of faith and free-thinking Canadians who refuse to deny truth,” he told LifeSiteNews.

In other words, a post-modern, nihilistic, neo-Marxist pseudo-theory of sexual identity and systemic oppression, dreamt up by some pretentious careerist professor of “queer studies” climbing out of the academic slime somewhere five years ago, has officially been declared the unassailable Absolute Truth by Justin Trudeau’s government. Unassailable as in “Alternative views will not be given a hearing.” Unassailable as in “Heretics will be burned.”

One of those heretics, a sort of hero of the martyrs brigade, is University of Toronto psychology professor Jordan Peterson, who has stood up publically, including in front of the Senate committee debating C-16, against the imposition of what he correctly calls “compelled speech” and specifically speech that implies acceptance of a particular, specious (to put it politely) theory of human nature.

For the past ten years, I have lived and worked in South Korea, under constant threat of nuclear attack from the communist North. I used to use that phrase, “the communist North,” without any ambiguity. Today, for the first time, I note the irony in a Canadian referring to any other land as “the communist North.” And today I ask myself without a hint of irony whether, if given the choice, I wouldn’t prefer to remain under permanent threat of nuclear attack, or even to face the reality of such an attack, rather than return to a homeland which is itself vigorously lunging toward the dystopian horrors of North Korean communism on a daily basis — compelled thought, re-education camps, criminalized dissent, and the mass hypnosis of a mindlessly compliant population. In short, is it worse to be attacked by a communist state or to live amid the incipience of one?

I wish I could at least feel the catharsis of crying out to the heavens, “My God, what happened to my country?” But the sad truth is that I know what happened. Progressivism happened. Public education happened. Socialized medicine happened. Moral deliquescence happened. Pierre Trudeau, North America’s first communist-admiring political leader, happened.

Pierre’s son Justin — the stereotype of the fop who takes a women’s studies class and talks the “systemic oppression” talk because it’s the best way to pick up cool, forward-thinking chicks — is merely window dressing on the revolution, a useful distraction to draw attention away from the blood smeared on the walls as the last generation of dissenters are dragged away by the thought police.

You think I’m exaggerating? That’s because totalitarianism rarely looks spectacular from up close. The fired professors (or talented but never-hired ones), the small business owners forced through state-designed tolerance-counseling sessions, and the parents turned in by their children for moral re-education, or fined for forcing their children to read the Bible with all its intolerable violations of Bill C-16, will start piling up. (The Quran will not be so assailed, of course, for its believers remain, for the time being, useful partners in the progressives’ anti-Western crusade, and therefore almost as morally untouchable as the boy whose parents dare to discourage him from wearing his mother’s make up on the pathetically antiquated grounds that it might confuse him.) And almost no one will notice these atrocities, apart from the victims themselves.