What’s Wrong With This Picture?

Today, U.S. Secretary of Defense Lloyd Austin and Secretary of State Antony Blinken wasted several hours of Volodymyr Zelenskyy’s time by playing tag-along following Boris Johnson’s attention-grabbing visit to Kyiv last week. We all know by now that the Biden administration is hellbent on helping Ukraine do just enough to prevent Vladimir Putin from achieving his “aims” in that country, but without going so far as to alienate Putin from any future usefulness as a negotiating partner in relation to “bigger concerns,” from Iran to climate change. For the Democratic Party has long been, and fully remains, the Ivy League’s political laboratory, and just yesterday CNN, the Democratic Party’s answer to Pravda, tested the waters on a coming shift in rhetoric by publishing Columbia University economist Jeffrey Sachs’ international socialist case for peace through appeasement.

At any rate, Austin and Blinken made their presence felt in Kyiv, and in the process made the essential laughability and unseriousness of today’s Western political elite as obvious as could be.

Here is the official photo they took with Zelenskyy to publicize their steadfastness as allies during a time of war: 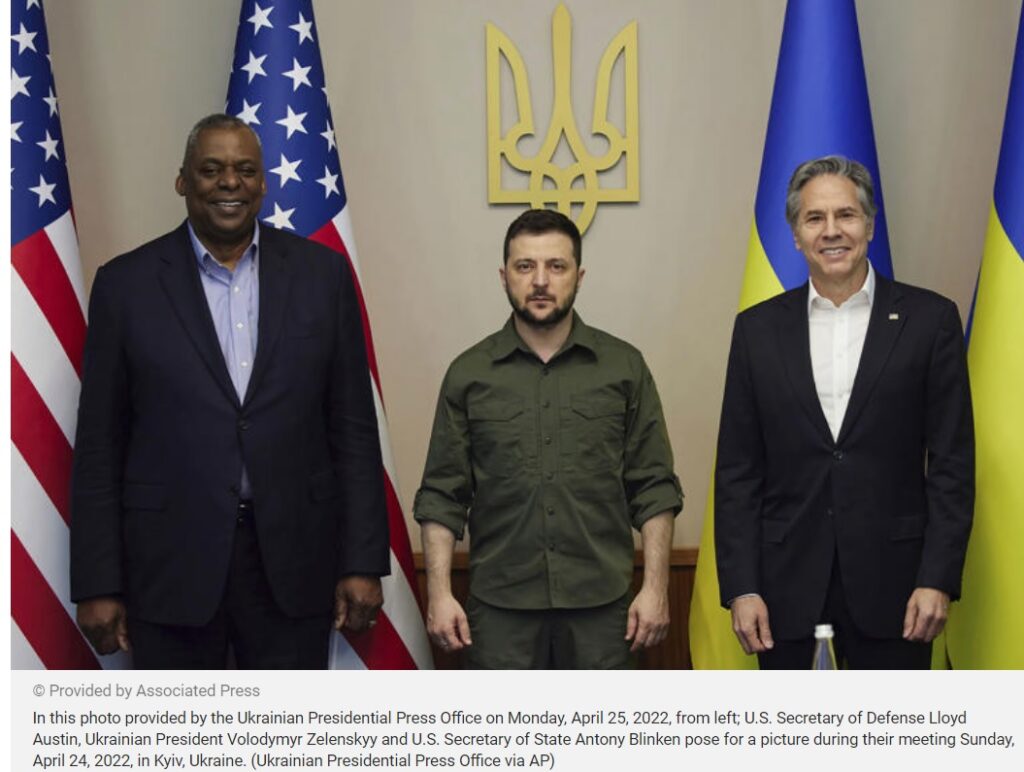 Zelenskyy, as usual these days, is dressed in battle fatigues, because he is living in a land at war, and is a prime target in that war. To show solidarity with his countrymen, as well as for simple practical reasons, he has traded in his fashionable tailored suits for the attire of a man who might have to grab a rifle and head for cover at any moment.

Austin and Blinken? They cannot even button up their shirts and put on a tie for a meeting with the most important head of state currently active on this planet. The disrespect and lack of propriety is revolting. Rather than dressing up to the gravity of the situation, they opt for the standard optics of today’s phony “politics for the people,” the pretense of being too workaday to fuss with silly things like formal dress, too regular to wear a tie to a meeting, too “casual Friday” to worry about such things as representing your country with dignity and solemnity. Ronald Reagan and George H. W. Bush rarely entered the Oval Office on a normal day without jacket and tie. Today, the highest foreign policy officials in the United States government cannot attend a meeting with a head of state during a major international crisis without consciously dressing down for the occasion.

And then as to their expression and demeanor. They are standing with a man who is leading a country under invasion, with mass graves and civilians trapped and starving in their besieged cities. But there they are, flanking Zelenskyy, whom they have reduced to virtually begging for assistance in his attempt to save his people from slaughter, with moronic grins on their faces. The typical facial expression of our popular photography and Instagram world: “Look, we’re happy! We’re nice! Wouldn’t you like to meet us?”

No I wouldn’t. I would like to slap those idiotic grins off your smug faces. Those grins you flash for the camera while standing in the capital of a country in which tens of thousands of innocent people currently lie in fresh pits dug for their easy disposal, by mercenary thugs sent by a tyrant whose regime you hope to save from embarrassment or ultimate defeat, so as to be able to shake hands with that tyrant again someday over a bargaining table somewhere — perhaps even to pose for exactly the same stupid photograph, sporting the same moronic smiles, next year. From smiling like idiots on either side of a president fighting for his population’s bare survival to smiling like idiots on either side of the man who tried to annihilate the previous president’s people.

If you want to understand why the West is lost, why its once-great, formerly unsurpassed civilization is now a dilapidated laughingstock to the world’s tyrants, you could do worse than simply spend a moment examining the above photograph. I mean really looking at it, and looking through it, seeing not only what is in the frame but what frames that frame, what lies beyond it and creates the context in which those two smiling idiots strike their cheerful poses.

Happiness as pleasure. Happiness as smiling. Happiness as cheerfulness. Happiness as a blithe disdain for seriousness, for the gravity of the situation, for the dignity of life and the indecency of mass murder, and for the plight of mankind under oppression.