Oh dear, Language does have a way with words, doesn’t she? Just when you thought the end of a civilization was going to pass us by without providing a single laughable moment—being a Socratic, I always believe an abyss is the ideal place to grope around for something to smile about—Heaven tosses down a manna cracker. 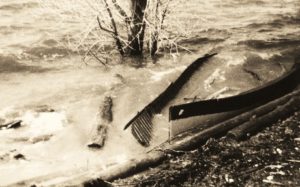 Will Hillary’s ship come in…

No, that’s not the funny part, although the results of this follow-up investigation will undoubtedly be a joke of the non-laughing-matter variety. The sweet consolation, provided by the goddess of Language, is in the source (according to The New York Times) of the new e-mail content which has prompted this mini-investigation: the laptop—er, the portable computer—of Anthony Weiner, along with that of his sort of wife, Huma Abedin of Muslim Brotherhood fame. Given Weiner’s own scandals, it is now permanently impossible to say, or even think, his name in any context without exercising one’s facial muscles to resist an attack by the satyr that resides in all of us, particularly when the target is so deserving of a little satirizing. (The inversion of the “e” and “i” in his name is undoubtedly a concession to the Vienna Chamber of Commerce, which presumably wanted nothing to do with a sausage of his kind, seeing that the manner of waltz he was proposing to his internet friends was hardly of the Viennese variety.)

Momentarily giving in to my own inner satyr, then, I find myself enjoying the thought of all the mainstream journalists of America, compelled to cover this story, but carefully combing their reportage for inadvertent Weinerisms, particularly ones that link Hillary Clinton herself to Weiner in this double-entendrified air. I imagine them nervously excising text such as, “Did Hillary have ever have contact with Weiner?” “Did Huma expose Weiner in Hillary’s private server scandal?” or “Could Weiner’s downfall be related to Hillary?”

Okay, satyr sated. I admit that’s crass, and Weinerisms are so easy and so obvious they’ve become a cliché. Still it’s amazing, in the sense of causing infinite despair, that entering the final week of a U.S. presidential election campaign, the pivotal issue with the potential to affect the outcome derives from an investigation into a pervert’s private indiscretions. And this topic is only the replacement for last week’s hot issue, which was whether Mrs. Clinton’s opponent hosted parties with underage girls, or merely boasted about grabbing the private parts of married women.

What is it with these Clintons, their friends, and their major donors-cum-“opponents”? Has America really come to this? Yes, sadly, it has, as have we all, I suppose. Next week’s U.S. election will largely determine the world’s direction over the next four years. Or rather, the direction is already determined (freefall tends downward), but the pilot of this suicide mission will be chosen on November 8th. And yet if only to prove that any predicament could be worse, we are now being deprived even of the comfortingly delusional peace of pretending this is “just another election.” Civilizational cataclysm and unstoppable moral decay were apparently not enough to teach us the lesson we need; no, we must spend these last days talking about crotch-grabbing and Weiners. The manner of our decline hangs on a…no, let’s not go there.

As I said, I’m a Socratic. If there is an escape from this nightmare, we must find it in thought. Hence I propose to take stock of the situation, and ride it out in relative equanimity, by rejecting its practical implications as mere material facts, neither here nor there to the higher part of us, and focusing instead on the intellectual underpinnings, namely on truth and language.

I began by noting that on November 8th the world’s leading power will be ruled—not governed, not by a long shot, but ruled—by its greatest presidential malefactor ever. So let’s be philosophical about this, and take a look at this week’s theme in a detached manner.

What is a malefactor? The word derives from Latin roots. The Oxford Dictionary summarizes as follows:

late Middle English: from Latin, from malefact- ‘done wrong’, from the verb malefacere, from male ‘ill’ + facere ‘do’.

Hence, a malefactor is literally an evildoer. One who does evil. The word evil turns a lot of people off these days, as it sounds so, well, judgmental. If our dominant faction of mindless relativists and moral equivalency junkies had their way, we’d have to strike the word malefactor entirely out of the dictionary, since on their view, the word would literally signify nothing.  After all, if there is no evil as such, then there can be no evildoers as such.

Of course, those who think this way about evil are never—oh, let’s be generous and say rarely—sincere in their belief. That is, they do not really believe there is no evil. They merely want the word evil not to signify any of the things they happen to like, for which they happen to have a weakness, or up to which they regularly sidle. That is, they hate to see the word evil in the hands of people who might employ it to throttle them.

This means that the relativists and moral equivalency junkies are weaklings who don’t really have the courage of their faith. They want to do things they know would be unacceptable or questionable in an age that judged itself, or believed it stood under a higher judgment, but they can’t accept the consequence that in doing these things they might be exposing themselves to such judgment. Their rejection of the notion of evil amounts to little more than the cowering child’s panicked lie to save his own skin from blame: “I didn’t know it was his when I took it!” The relativists are trying to avoid responsibility by saying, in effect, “The category into which my actions fall doesn’t really exist!”

Nietzsche, one of the progenitors of our modern relativism, had courage, standing up amidst a society of Christians and calling himself the antichrist. Today’s heirs to Nietzsche’s towering rejection of traditional standards, by contrast, fall back on mantras like “Everybody does it,” or “Stop being so old-fashioned.” These are not courageous self-defenses, but just the opposite. Such people are hoping to hide behind the mass of the population by coloring everyone with the same brush, as though majority vote had any sway in moral matters.

Hillary Clinton and Donald Trump are textbook case studies of this mentality. They have shown themselves, consistently and repeatedly over their entire adult lives, to live without a “traditional” moral compass. Trump defends this obvious fact about himself by calling his choices “New York Values,” implying that hedonistic materialism and cynical opportunism constitute a valid moral option. Hillary defends hers by saying “What difference, at this point, does it make?” implying that any action becomes morally forgivable simply by being gotten away with—the criminal’s creed. In other words, both candidates display the coward’s need to vindicate himself by hiding behind relativism or moral equivalency.

If they had courage, or if their supporters had it, they and we would be calling a spade a spade this week: 2016 is the fateful year of the malefactor in America. One will become President. That’s a simple truth, and the keyword for this miserable week.