The current state, or rather condition, of America’s Republican Party, its death agony as the party of Donald Trump and his idol-worshipping hordes, is not the result of chance, delusion, or any kind of hostile takeover. It is the inevitable result of a political movement that has long-since become unmoored from sound principles and habits of moderation and moral continence.

Tell yourself for years that winning elections is the primary goal of your party’s existence, regardless of what nobler aspirations you have to concede, mask, or flat-out reject in order to achieve such Pyrrhic victories, and eventually there will be no internal resistance to a man who brashly declares himself the all-time champion of winning ugly.

Tell yourself for years that freedom is the highest political good (true), but further that freedom means “capitalism” (half-true), that capitalism means big business (a Marxist premise), that business means making money at all costs (pragmatically factual, morally vacuous), that money-making has no inherent moral limits, i.e., “greed is good” (the “science” of material gain divorced from all other considerations), and eventually there will be no internal resistance to a man who trumpets his huge wealth and willingness to do anything, say anything, support anything, and align himself with anything in order to increase his wealth. 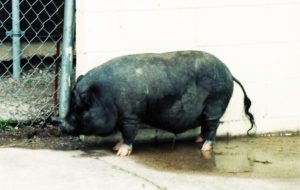 Whatever became of that noble elephant?

Tell yourself for years that art and philosophy are for “losers” and “liberals,” and therefore that the only legitimate use of reason is calculating one’s material advantage, while the only legitimate outlet for the sensibility is mindless amusement and “guy stuff,” and eventually there will be no resistance to a crass, vulgar Caligula with the taste and tact of a pot-bellied pig and the intellect of a cash register.

The point is not that everyone in today’s GOP, from the leadership on down, is a Donald Trump. Far from it. But how then to explain the rise of Trump from the ashes of these seemingly normal, reasonable people? The answer is most likely that, due to the things the Republican majority has been telling itself for years, as outlined above, it has effectively put its righteous instincts to sleep, leaving the impending moonless night of civilization as an unpatrolled stomping ground for the embodiment of all the movement’s worst inclinations, tendencies which, though always present, used to be mitigated or somewhat counteracted by nobler intentions.

Yes, the Republican Party was and is long overdue for new leadership, a new vision, and a sincere commitment to advancing the best interests of the grassroots citizenry whose support it demands, but whom it in fact sells out at every turn. But that Trump in any way represents this new leadership, vision, and commitment would be an obvious absurdity were it not for the moral tranquilizer the party has been administering to itself and its loyal voters these many years.

This year was indeed the time for a fundamental rethinking and transformation of the Republican Party. The opportunity was there. The grassroots voters were motivated. The milquetoast old guard had been put on notice that substantial change was coming. So why did all that ferment issue in something so negative, suicidal, and ugly?

I have tried to hint at an explanation above, but as is often the case in matters of the soul, the final answer is perhaps most clearly expressed not in argumentative language, but in the language of art. This semester, I have been teaching Robert Louis Stevenson’s The Strange Case of Dr. Jekyll and Mr. Hyde to an undergraduate literature class. The novella is rich with suggestiveness for today’s world on so many levels, but recently a short passage from the final chapter has occupied my thoughts. Dr. Jekyll, in a letter only revealed after his death, tries to explain why the chemical concoction he devised to divide his nature in two should have resulted in something as hideous as the amoral, murderous Edward Hyde. Merely replace the name Edward Hyde with Donald Trump, and the name Henry Jekyll with Republican Party, and you have the story of this fateful American year stated with more clarity than could be provided in ten thousand non-fiction words–partly because no one would regard a non-imaginary description of the current situation as fully credible, even as they watch the reality itself unfold.

That night I had come to the fatal cross-roads. Had I approached my discovery in a more noble spirit, had I risked the experiment while under the empire of generous or pious aspirations, all must have been otherwise, and from these agonies of death and birth, I had come forth an angel instead of a fiend. The drug had no discriminating action; it was neither diabolical nor divine; it but shook the doors of the prison-house of my disposition; and like the captives of Philippi, that which stood within ran forth. At that time my virtue slumbered; my evil, kept awake by ambition, was alert and swift to seize the occasion; and the thing that was projected was Edward Hyde. Hence, although I had now two characters as well as two appearances, one was wholly evil, and the other was still the old Henry Jekyll, that incongruous compound of whose reformation and improvement I had already learned to despair. The movement was thus wholly toward the worse.