Marginalizing the Will to Freedom

On Monday, a circuit judge in Oregon, responding to a lawsuit by several churches, declared the state’s lockdown order unconstitutional, effectively striking down the regulations. To no sentient being’s surprise, the Oregon supreme court has quickly reinstated totalitarianism in answer to an “emergency motion” by the governor, pending a “review” by the supreme court — i.e., until the state’s judicial lackeys can figure out how to insulate their power lust from that pesky minority who continue to take all that liberty-and-the-rule-of-law nonsense literally.

As for the compliant majority, however, their position on such matters is only too obvious, and quite understandable, once you take these three factors into account: (1) they were raised by the government; (2) they have had all the character and rationality sucked out of them by a life of mindless comfort and pleasure; and (3) their quasi-thinking is being carefully controlled on a daily basis by a propaganda machine more potent and unrelenting than anything the world has ever seen.

Americans even to this day — or at least the ones who still fool themselves into thinking they live in a semi-free country, i.e., the “pesky minority” noted above — continue to use quaint expressions like “freedom of the press” to describe the public dissemination of information in their nation. Meanwhile, in the rest of the world, it is well understood that the American news media is only nominally freer, and certainly no more interested in providing any service in support of freedom, than that of North Korea.

Case in point: I first read of the Oregon circuit judge’s ruling in favor of freedom of association (a dusty concept related to that silly old Constitution thingy) in a story linked at Microsoft News. The actual article, from the Associated Press, concluded, sensibly enough, with a quote from the victorious church groups’ lawyer.

“Praise God. I’m excited, and I’m glad that the judge saw that there are limitations on the governor’s power, even in the midst of emergencies,” he said.

What caught my attention, however, was that immediately below this story, Microsoft News had inserted a poll question to “survey” their readers’ opinion on this story. Why did I put scare quotes around the word “survey” in that last sentence? Here is a screen shot of the poll and its position relative to the story’s conclusion: 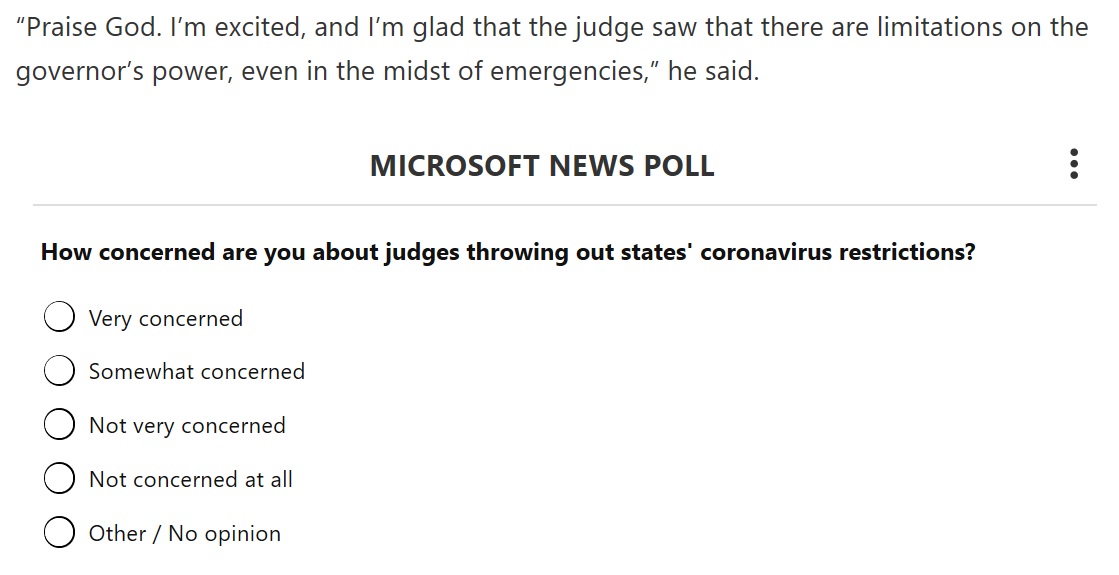 Notice the wording of the poll question: “How concerned are you about judges throwing out states’ coronavirus restrictions?” Not “Are you concerned about these rulings?” or even more impartially, “What do you think about these rulings?” No, the default presumption or hidden premise of the poll is that “concern,” i.e., disapproval, is the natural and appropriate response to judges ruling against lockdown orders on constitutional grounds, with the only legitimate question being how deeply you disapprove.

Notice, further, that due to the wording of the question, none of the prescribed answers is suitable to a person who actually agrees with such rulings. That is, supporting constitutional liberty against the assertion of excessive state power is not even an option in this poll. Even the last prescribed alternative, “Not concerned at all,” given the question’s wording, implies not approval of the Oregon circuit judge’s decision, but rather a mere lack of interest, or perhaps a certain insouciance or dismissiveness about the ultimate fate of such foolish rulings, as in, “No, it doesn’t bother me, since I know it will be overturned.”

For those who genuinely oppose state lockdowns, and therefore might wish to express an objection to the very premise that one ought to be concerned about judges ruling in favor of liberty, the only plausible choice available in this poll is the nondescript “Other,” which of course is an excellent repository for dissenting opinion, since it is meaningless, and therefore effectively hides the dissenters’ opinion behind a wall of indefiniteness. Furthermore, the pollsters in this case, leaving nothing to chance, have even taken the added agenda-protective step of lumping the generic “Other” together with “No opinion.” Thus, if you wish to register support for this court ruling, you have not only been wedged into the obscuring nothingness of “Other,” but will also be lumped together in the final tally with complete morons who answer online polls on issues about which they have no opinion whatsoever.

This survey, then, provides no way at all for those who support freedom and oppose government overreach to register their view. More importantly, however, it is a nice little object lesson in the principles and practices of mass manipulation through the carefully limited framing of social or moral issues, and the guiding application of language to exclude undesirable or non-compliant ideas from the public discussion, and even more importantly to obscure the path to such ideas within the individual mind.

The reason this method of manipulation matters is not primarily because of its use in such online news polling, since such obvious deceit would be worthless to the propagandists if they presented it to a population that was still basically rational and moral in its outlook. Rather, it matters most due to the reason that such cheap and obvious manipulation tactics are deemed effective by the mass media today, namely that these techniques — the limited framing of issues and the deliberate obscuring or muddying of thought paths — form the essence of modern government-controlled education. This MSN poll is merely a simplistic iteration of the modes of teaching and learning through which our minds were all processed growing up. In a nutshell, this is the Dewey method.