Right Scoop gleefully announces that former Sheriff Joe Arpaio is reopening his extremely helpful and productive investigation into Barack Obama’s birth certificate. Even the hardcore “birthers” of 2011 have to be hiding their heads under their pillows at this news. Among other things, the more intelligent among them will see that this would be the Trump presidency’s worst nightmare.

Back when Trump first toyed seriously with the idea of running for President of the United States, his initial attempt to carve out a Republican grassroots following was by trying to portray himself as the leader and chief advocate for the “birther” movement. The effort blew up in his face, as the release of Obama’s so-called long form birth certificate made his whole publicity campaign a laughingstock. Trump, in his typical manner, responded by declaring this defeat an “amazing” victory, arguing that without his having forced Obama’s hand, the certificate would never have been released, i.e., conceding that Obama was born in Hawaii, not Kenya, but claiming that this somehow vindicated Trump’s birther campaign.

On this reasoning, anytime someone makes an international joke of you by proving to the world that you were talking out your other end, you can boast of having forced him to humiliate you.

Arpaio’s plan to revitalize his birth certificate investigation has to frighten Trump’s fans — and it is likely that almost all the former “birthers” are current members of the Trump cult — for two simple reasons: Trump can’t resist any opportunity to comment publicly about anything, and the mainstream media knows it. If Arpaio’s effort picks up steam, the media will use it (as they did in 2011) to make Republicans and conservatives look ridiculous. And what better way to do that than by drawing Trump out on the topic, always the easiest thing in the world to do.

This could become a real predicament for Trump’s establishment handlers. If Trump says Arpaio is wasting his time, then he becomes a sell-out before his alt-right base; if he speaks even half-respectfully of Arpaio in this context, then he undermines all the attempts to make him seem presidential, by putting himself back out on the Alex Jones fringe. And one thing is certain: Trump will speak on the subject, if given the opportunity.

I’m betting there are people in Trump’s camp even now starting up a collection to pay Arpaio not to reopen this matter.

As for my own attitude regarding the whole birth certificate issue, I was all over this back in 2012, opining that the truth behind Obama’s origin myth is even more nebulous and complex than the Kenyan birth conspiracy theorists understood.

Here, for your nostalgic pleasure, is the article I wrote about this for American Thinker on May 19, 2012. Enjoy.

Thomas Lifson has already made the definitive statement (here) as to the absurdity of the claim that a literary agent’s brochure listed Barack Obama’s birthplace as Kenya — for sixteen years — due to a “fact checking error” by bio editor Miriam Goderich.  And it has been widely noted by those with far more experience in the publishing industry than I that such an author’s biography would never be written without the involvement of the author or his official representative at some stage of the process.

Yet there is another peculiarity about this mysterious Kenyan birth “mistake” that seems worthy of notice.  The brochure in question first appeared in 1991. At this time, Obama was merely a prospective author.  He had not yet written a book, and, as is well known, he had never published any academic work or articles of note.

His only real claim to significance, at that time, was his being the president of the Harvard Law Review.  And this accomplishment, in fact, forms the lead sentence of the infamous bio:

Barack Obama, the first African-American president of the Harvard Law Review, was born in Kenya and raised in Indonesia and Hawaii.

This bio was written just one year after Obama was elected to the Harvard position.  Upon his election, both the New York Times and the LA Times ran articles announcing this first of Obama’s now endless series of “historic” achievements.

In the NYT article, published February 6, 1990, after a brief account of his parentage, we read this simple sentence: “Mr. Obama was born in Hawaii.”

In the LA Times article, published March 19, 1990, we read this: “Born in Hawaii, where his parents met in college, Obama was named Barack (blessed in Arabic) after his father.”

The two highest-circulation metropolitan newspapers in the U.S. explicitly claimed that Obama was born in Hawaii, a year before the Acton & Dystel bio was written.  And those two earlier articles, like the literary agency’s bio, were focused on Obama’s position at Harvard Law Review.  Where did the NYT and LA Times reporters (Fox Butterfield and Tammerlin Drummond, respectively) get their information about Obama’s birthplace?  Presumably, it was either from Obama himself, or from Harvard records.  The former seems far more likely, given the parental details included in both articles.

So it seems that Obama was clearly representing himself as born in the U.S.A. in 1990, one year before the Acton and Dystel bio.

What are we to make of this, given the fact that a year later, and likely working with the same potential sources of information, Miriam Goderich (or someone else) wrote that Obama was born in Kenya?  And that this “fact checking error” was left unaltered during the entire time Obama was represented by the Dystel agency, a relationship which ended only in 2004, when, according to the New York Times, Obama switched to Robert B. Barnett?

Did Goderich jot down this bio casually while reading the LA Times article upside down after drinking heavily?  Or was she merely confused about her “facts” after listening to an overgrown student radical named Barack Something-or-other drone on with historic pomposity for an hour about his family history?  (More believable, to be sure.)

In either case, can you imagine being represented by a literary agent for thirteen years, from a time before you were first published to the time you became a best-selling author, and never once bothering to read the bio with which the agency is representing you to publishers?

For that matter, can you imagine Michelle Obama, clearly a hands-on participant in her husband’s literary career, never having bothered to read it?

This bio in no way proves that Obama was born in Kenya, particularly in light of the two newspaper articles from a year earlier which describe him as having been born in Hawaii.  What it does suggest, as others have observed, is that this man and his promoters have a long history of playing cat-and-mouse games with Truth.  And not just regarding nebulous little matters like job creation or how we are to understand clause 7b on page 2,328 of some piece of legislation, but rather with regard to basic facts about who he is.

Barack Obama is vying to go down as the most visible, well-traveled and destructive “man who wasn’t there” of all time.  And the conclusion of Hughes Mearns’ famous rhyme sums it up best for the rest of us: 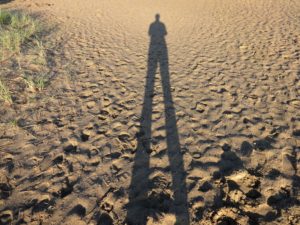 Last night I saw upon the stair
A little man who wasn’t there
He wasn’t there again today,
Oh, how I wish he’d go away.