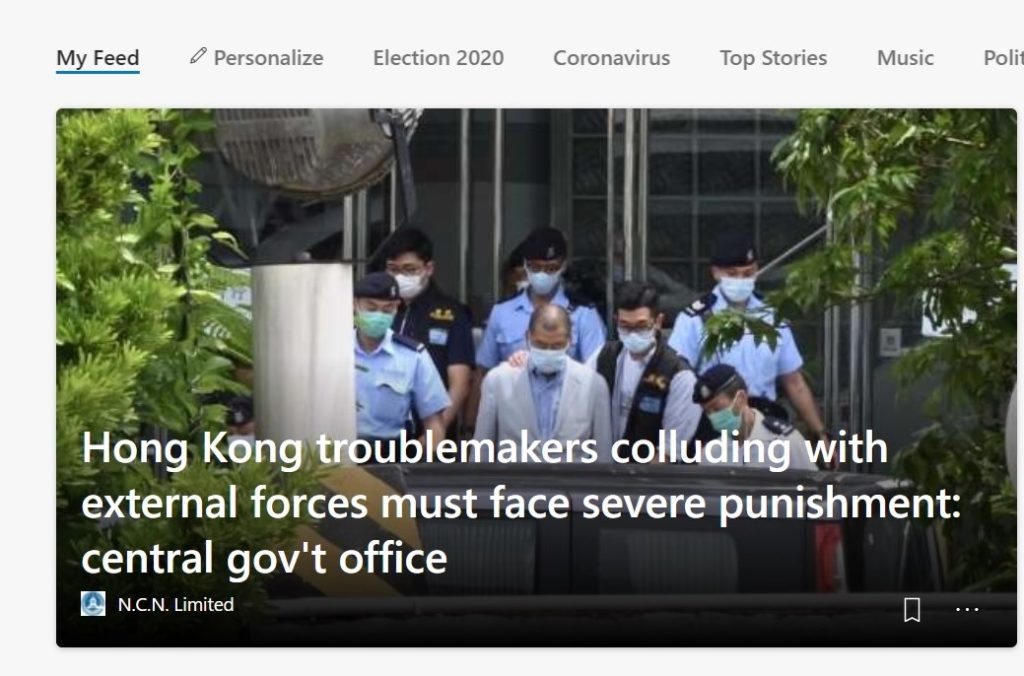 Finding this a peculiarly uncritical tone in which to be reciting the Chinese Communist Party’s bunk, I clicked the link to this story, which turned out to be an actual English language article distributed by N.C.N. Limited, the Hong Kong front office of Xinhua, a Beijing-based news outlet that has proudly served as a propaganda wing of the Communist Party since 1949.

From the article, which was filed from Beijing:

The Chinese central government on Monday voiced firm support for the Hong Kong police’s arrest of seven people, including Jimmy Lai Chee-ying, saying they must be severely punished according to the law for colluding with external forces to endanger national security.

And a little further along, the following — and this is not a direct quotation from any individual source, but the “news” reporters’ own uncritical representation of the official truth from an unnamed “government spokesperson”:

The United States interfered in Hong Kong affairs and sowed trouble in Hong Kong in such an unscrupulous way precisely because it had been fostering these political agents, and colluding with them with evil intentions.

The anti-China troublemakers’ activities hindered the steady and sustained development of “one country, two systems” as well as Hong Kong’s long-term prosperity and stability, the spokesperson said, adding that these activities have posed a grave threat to China’s national security, jeopardized Hong Kong’s lasting peace, and undermined the fundamental interests and wellbeing of Hong Kong residents.

The spokesperson noted that under the “one country, two systems,” Hong Kong residents enjoy unprecedented democratic rights and highly extensive freedoms in accordance with the law.

However, the spokesperson said, the bottom line of the “one country, two systems” must not be crossed, and the rule of law will tolerate no challenge.

Anyone know Bill Gates’ phone number? Perhaps he would like to know that the news organization packaged with every Windows 10 computer is now officially operating as an extended propaganda arm of the Chinese Communist Party in a direct assault on liberty and an overt attempt to normalize communist totalitarianism through moral equivalency representation.

I’m joking, of course. Gates already knows this very well, and has no problem with its intended results. Global progressives are global progressives. They will have some squabbling to do amongst themselves later as to the spoils, but at this moment, their hearts are all essentially in the same place. One thing they all agree on is that there can be no tolerance for those “troublemakers” who insist on demanding more freedom and less centralized control, at the expense of the democratic peace and security we all desire.