A Category 4 hurricane has hit Florida. This, like all weather of any kind, is being reported in the mass media, and filtered through the minds of ordinary people everywhere, as an unprecedented, unthinkable, ominous event, and surely all the evidence you need, if you’re not just a pig-headed capitalist big-oil-owned monster, that anthropogenic climate change is REAL!

As ABC News reports (to keep pace with everyone else on Earth), Hurricane Michael was “a ferocious and historic storm.”

Historic. That word, spoken in the context of weather, triggers me. Is there a MeToo movement for victims of climate propaganda abuse?

Michael was historic, it turns out, because it was “the fourth most powerful storm on record to hit the U.S., and the worst since Hurricane Camille in 1969.”

“On record” means since climatologists started keeping records of these storms using the measuring equipment they use now, but which didn’t exist in centuries past. In other words, we have no way of knowing how many storms equal to or greater than Michael have hit the U.S., since there are no accurate records prior to very recent times.

“The worst since Hurricane Camille in 1969,” more interestingly, means Michael is the severest storm of its kind to hit the U.S. since almost fifty years ago, before the whole idea of anthropogenic climate change even existed, and well before it is supposed to have exerted any major effects on weather patterns or “severe weather.” In other words, at least three storms harsher than the Category 4 Michael hit the U.S. in the decades after the advent of accurate measuring tools, but before global warming was all the rage, i.e., before we were all supposedly on the brink of extinction as punishment for our sin of trying to survive more comfortably than our forebears.

Meanwhile, another typical rhetorical flourish of the climate change era is the eager groping for opportunities to use the word “unprecedented.” Thus, from the Weather Channel, we get, “Michael made landfall as a catastrophic, unprecedented Category 4 hurricane on the Florida Panhandle early Wednesday afternoon.”

From the sentence structure, one is apparently supposed to imbibe the vague implication that what is unprecedented is the Category 4-ness of the storm itself, rather than merely its precise point of landfall. There is nothing so remarkable about a major storm hitting a particular small point on the map harder than that point has been hit previously, since

That the storm’s severity itself is not “unprecedented” is obvious from the fact that the storm rating system runs to Category 5, whereas this one, thankfully, fell short of that.

Is Michael ferocious? Yes. Catastrophic? Yes. But historic and unprecedented? Those are catchwords of the global climate change propaganda industry, and trigger words for this climate-sensitive victim of progressive rhetoric overload.

And I must note in passing that far from being insensitive or oblivious to the seriousness of hurricanes, I actually live in a hurricane-prone area, though we call them typhoons over here (same phenomenon, different name according to location). As a matter of fact, a typhoon just swept past us last week, although luckily by the time it reached land it had tapered off to a mere tropical storm (the ranking just below Category 1 typhoon/hurricane). We had severe wind gusts, the sort that can suddenly stop you in your tracks no matter how hard you fight to move forward. (If you’ve never experienced that, it can be quite harrowing, even upsetting, the first time, and definitely not recommended for anyone with respiratory or heart problems, or a tendency toward anxiety.) And we had flooding, relatively minor this time, that damaged a lot of ground-floor homes and businesses in some of the older neighborhoods.

Korean cities are invariably built amid mountain ranges, so in areas along the coasts, civil planning accounts for the danger of landslides and disastrous rain run-off from the mountains with elaborate manmade river networks to conduct flood waters safely through the city. Still, during a typhoon, these rivers, which are typically down to a trickle at this time of year, can suddenly, in the course of a few hours, reach water levels that strain or even overwhelm their banks, and turn the innocuous trickle into impressive and dangerous rapids.

Having lived in a typhoon zone for many years now, and seen quite a few severe storms up close, expressions like “Category 4” have real and profound meaning for me, and I can truly sympathize with anyone who has had to suffer through such a thing, seeing as how the worst storm to hit my area during my years here so far has been a “mere” Category 1, during which the vast wooded areas within my university campus, for example, were decimated, with hundreds of trees completely uprooted by the winds — I mean hundreds on the campus alone — in the course of a few hours. 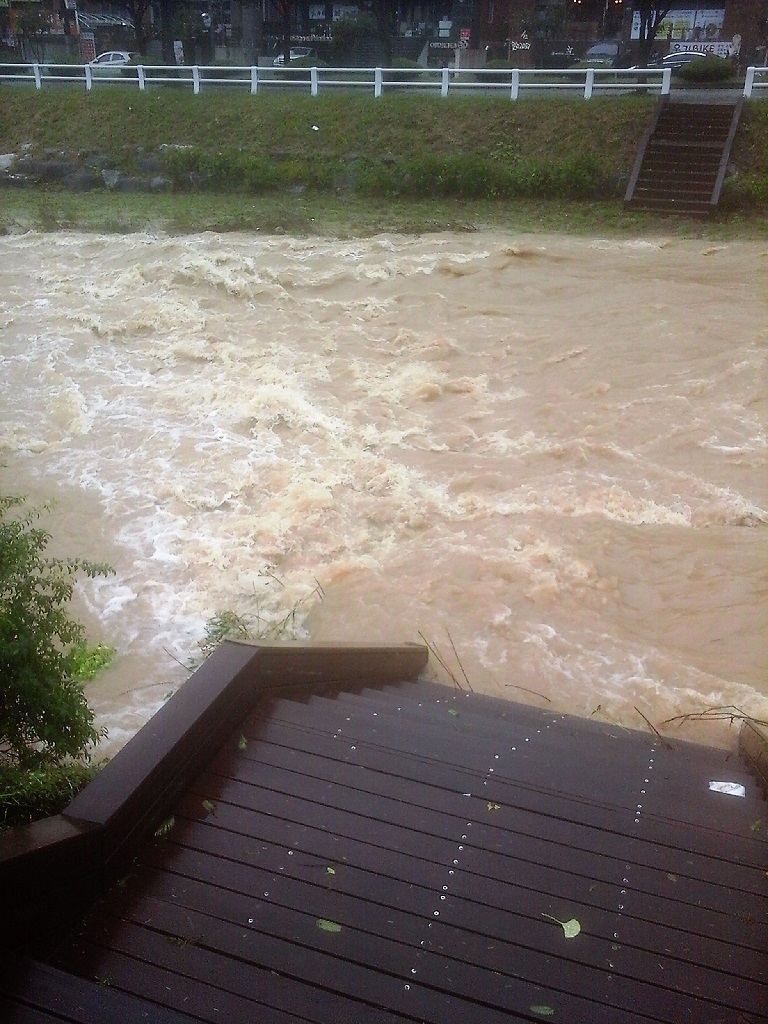 No crossing today. This river was a trickle ten hours ago, and much higher than this three hours ago, before the rain stopped. Typhoon Kong-rey, October 6, 2018. 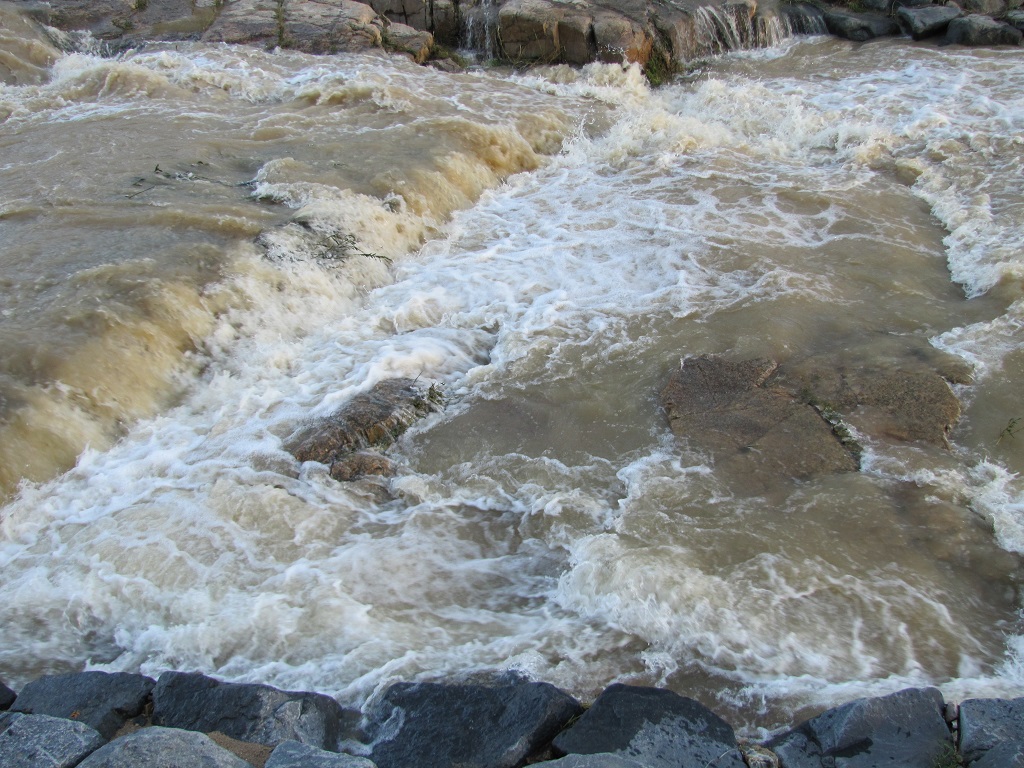 Another river that was a trickle yesterday. You can usually cross the rocks on foot easily. 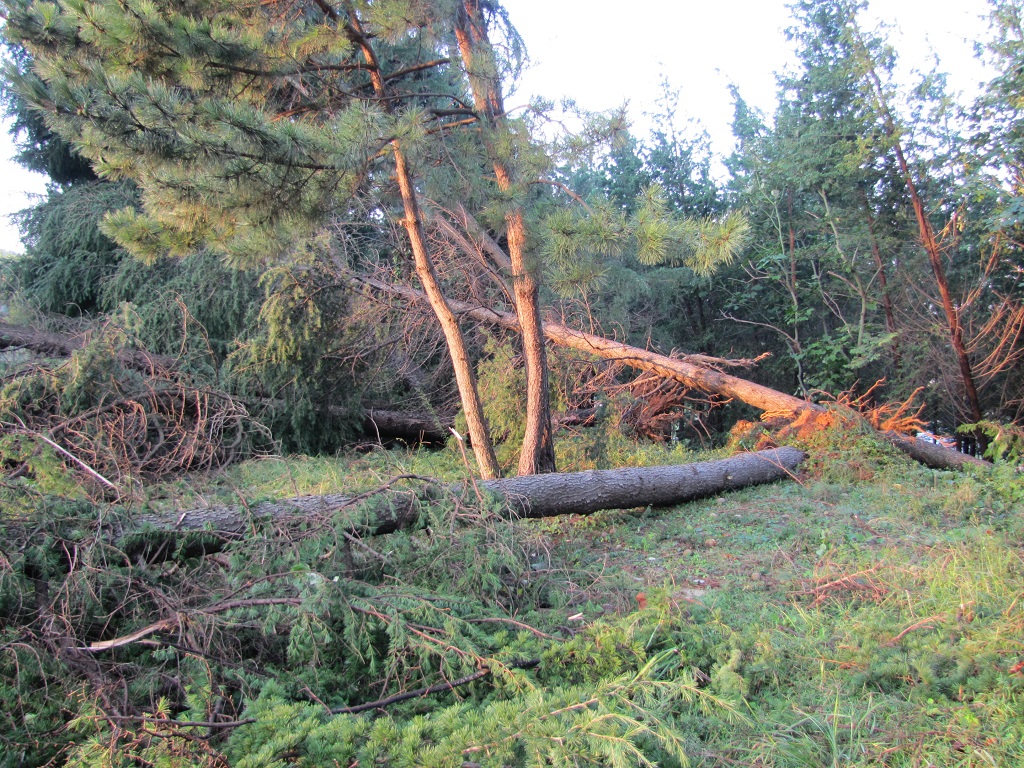