The Case Against Public Education 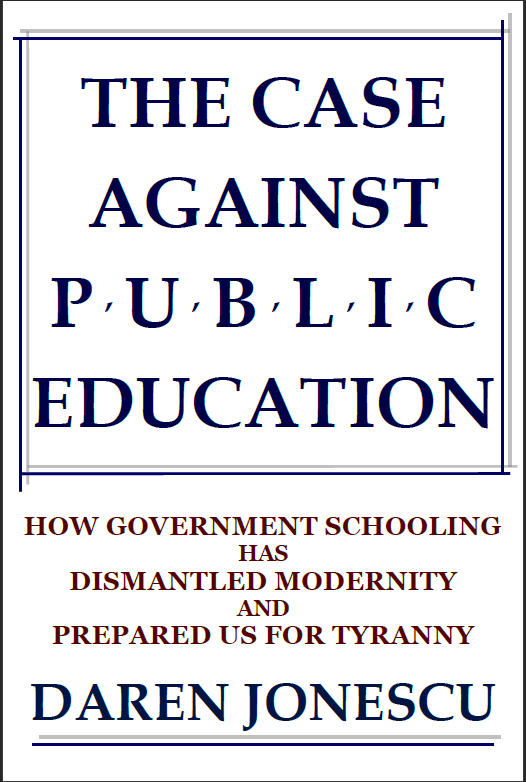 Well, my long-promised book, The Case Against Public Education, is here at last. For at least two years, I have been telling anyone who asked that the book would be available “very soon,” “within the next month or so,” or “in the next couple of weeks.” Though those falsehoods were not deliberate lies, I do feel that I owe an explanation to so many people whose eager initial inquiries about the book’s status later became patient follow-up inquiries, and finally, I imagine, perplexed non-inquiries.

The book was largely complete more than a year and a half back, and the decision to release it for free on my own website was made at least that long ago. (Read more about that decision here.) However, a combination of health interruptions, family crises, a heavy teaching load, and most of all my nature as an inveterate tweaker–I never met a final draft I couldn’t de-finalize–conspired to turn weeks into months, and “very soon” into “eventually.”

In the end, however, perhaps the timing of the book’s emergence from the shadows will prove just right. Within the past year, the last country standing, or rather teetering, between the ramshackle ruins of modernity and the gang of ne’er-do-wells with matches, has decided to step aside and let the final conflagration begin. Indeed, by staging a supposed presidential election–her first since rendering the whole concept irrelevant in 2012–between two characters such as Hillary Clinton and Donald Trump, it appears that America has decided to join in the ne’er-do-wells’ doomsday bonfire unreservedly at last, as she is certainly providing the weenies.

Thus, the modern era, sown seven centuries ago in continuity with a broader civilization that has evolved and endured through the past three thousand years, is petering out at last, and voluntarily. For that minority of men and women, anywhere and everywhere, who still have the will to resist the decline, this is a disillusioning and sobering moment. If reconciling oneself to the inevitability of the fall is not to lead to the kind of despondency that smothers souls, then it is time to accept the undeniable too-lateness of all immediate political solutions, and make the spiritual turn, as men have had to do before, to long-range thinking about first principles. In other words, it is time to reset our focus on what comes after the fall.

I propose that for civilizations as for individuals, the source of any hope for an expansive, substantial development, and a fruitful quest for mature humanity, lies with education, by which I most decidedly do not mean “schooling,” but rather the age-old urge to self-discovery and a life lived in pursuit of the true fulfillment of human nature, aka happiness. This may be the time, then, to take stock of the important role a corrupted educational establishment has played in the final degradations of our “progressive” late modernity, and in light of that consideration to contemplate the centrality of a properly reconfigured concept of education in any possible rebirth from our dehumanizing morass of soft despotism.

So perhaps my book’s delays, though often frustrating to me personally, will prove serendipitous in the long run. I say that with neither false bravado nor self-aggrandizement, but merely to note that it now seems to me that at this moment, the lights-out moment for modern civilization, what is most needed is a serious discussion of how our foundations were undermined, and what will have to be done to rebuild. Regarding both of those questions–the roots of decay and the source of rebirth–the most essential element of any answer will be an in-depth reassessment of everything we think we know about education in general, and in particular about a civilized society’s means of rearing its children.

The Case Against Public Education is intended to be one man’s sincere and hopefully useful contribution to this historically necessary ground-clearing discussion.

To begin reading the book in its entirety right here on darenjonescu.com, click here. To open or save the PDF version of the book, or to download a free e-pub, Mobi, or AZW3 (Kindle) version, click here.